In recent years, technological development in consumer electronics and industrial applications has developed rapidly. More and smaller, networked devices are able to collect and process data anywhere. The Internet of Things (IoT) is a revolutionary change for many sectors like healthcare, building, automotive, railway, etc. Some developments are technologically amazing and frightening at the same time. Examples are fitness trackers, small devices that measure your movements and motions with help of integrated sensors. They can improve health by measuring your physical activities, measure your sleep quality etc. However, in 2018, the use of such fitness trackers has revealed secret locations of US military bases worldwide by publishing the regular jogging routes of soldiers on the Internet. [1] Information that would never have been stored a decade ago is now publicly available. The availability of those amounts of data also goes hand in hand with the development of Artificial Intelligence (AI) and Machine Learning (ML) algorithms to process them. With their use, faces of your friends can be recognized automatically in your online photo album or devices in the household can be simply controlled via voice recognition. The other side of the coin is the vulnerability of these devices in terms of security. Recent hacks of millions of webcams, printers, children’s toys and even vacuum cleaners as well as Distributed Denial-of-service (DDoS) attacks reduce confidence in this technology. In addition, users are challenged to understand and trust their increasingly complex and smart devices, sometimes resulting in mistrust, usage hesitation and even rejection.

The developments described above mostly cover processing of data in centralized cloud locations and hence cannot be used for applications where milliseconds matter or for safety-critical applications. By moving AI to the edge, i.e. processing data locally on a hardware device, real-time applications for self-driving cars, robots and many other areas in industry can be enabled. The push of AI towards the edge can also be seen by recent announcements in consumer electronics. Google has reduced the size of the cloud-based AI voice recognition model from 2 GB to only 80 MB, so that it can also be used on embedded devices and does not need Internet connection [2]. The technological race to bringing AI to the edge can also be seen by very recent developments of hardware manufacturers. In October 2018, Google released Edge TPU [3], a custom processor to run the specific TensorFlow Lite models on edge devices. Many other, mostly US companies like Gyrfalcon, Mythic and Syntiant are also developing custom silicon for the edge.

The InSecTT partners believe that Artificial Intelligence of Things (AIoT) is the natural evolution for both AI and IoT because they are mutually beneficial. AI increases the value of the IoT through machine learning by transforming the data into useful information knowledge, while the IoT increases the value of AI through connectivity and data exchange.

The overall objectives of InSecTT are to develop solutions for (1) Intelligent, (2) Secure, (3) Trustable (4) Things applied in (5) industrial solutions for European industry throughout the whole Supply Chain (6). More precisely:

The first picture gives an overview of the focus of InSecTT. Local intelligent processing makes it possible to reduce the data required for transmission. Although most of work will be done on local level, communication with a cloud is not excluded and will be needed in the right balance in some use cases. User trust and concern considerations will be incorporated throughout the design, development, and evaluation processes to ensure trustworthiness and acceptance

Today, the development of IoT devices is already so complex that human errors inevitably occur in the conventional development process during their development. This is often exploited by resourceful hackers to compromise security and consequently leads to a loss of consumer trust. By using AI, a completely new approach is taken. The burden of finding solutions to complex problems will be transferred from the programmer to their program. 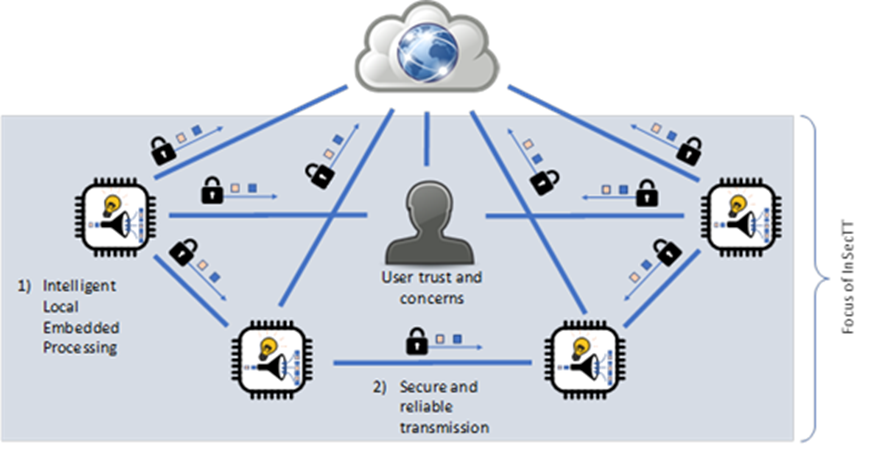